Should I remove the ivy on my tree?

Ivy rarely kills a tree. This is because it doesn't get its nutrition from the tree like other plant parasites do, but rather it lives on the nutritients it gets from the soil it beneath the tree.

However, it isn’t good for a tree if ivy gets into the canopy. A tree's leaves that are covered by ivy will be unable to get sunlight to make food. In addition, heavy ivy cover can hide signs of a hazardous tree, such as mushrooms, cavities and decay.

Cutting ivy away from a tree usually enhances its beauty. But before you start, make sure you know what kind of vine you're cutting! It could be English or Irish ivy, Virginia creeper, or wisteria — or is it another very widespread vine, poison ivy?

Poison ivy is easy to spot because of its distinctive three leaves. The vine has very fine reddish-brown hairs which attach to a tree. Don't touch it, and don't let it touch you! If you've never experienced a poison ivy rash, you're lucky. For those who are allergic to poison ivy — and that includes most people — the rash lasts up to two weeks, spreads easily on the skin if you scratch at it hard enough, and is usually very itchy and uncomfortable.

Remember: it is the oil on poison ivy leaves and vine that causes the allergic reaction. It is "active" year round. So take precautions no matter when you're doing ivy removal.

As shown below, you can remove any kind of ivy yourself. Wear gloves and a long-sleeved shirt. Use hand pruners or a handsaw designed for pruning -- not a machete, carpenter's saw, bow saw, or chainsaw. Cut each strand of ivy with two cuts 6 inches apart. Then use a flat crowbar and hammer to pry the ivy off. Be careful not to cut into the outer layer of the bark as you remove the vines because this will hurt the tree. Once you cut the ivy stems around the lower part of the trunk, the ivy above will wither and die, and eventually drop off the tree. A heavy infestation may take a couple of years to drop off, but your tree will be much happier for it. 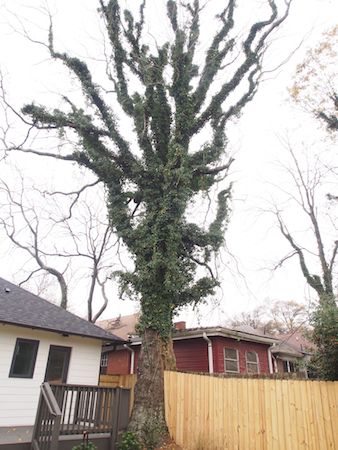 Taking Care of Your Trees